non-touch
30 minutes
non-touch is a performance which explores various points of apparent, but not actual, touch, between two bodies; as well as the resulting movement qualities from this micro focus.

Sine-tones of different frequencies are panned across the space, only meeting indirectly, through reflection, not within the speakers.The result is a phasing soundscape, which is heard differently throughout the space.

Eight dancers worked in an intensive workshop, 1hr. 30 min., which culminated in a 30 min. performance of the score. One dancer introduced a one minute phrase, which was repeated a total of 30 times, in different configurations, along with a one minute sound loop.

(3) minutes – (20) times is a sixty minute improvisation score for one sound performer and three dancers.

The concept of the score is to create a phrase through improvisation, and to maintain a loop of that phrase. The phrase becomes more complex, through duration and by increasing and decreasing the configuration of the dancers, and who is leading. These simple changes allow for many potential developments in the phrase, such as unison, phasing, or simultaneity.

The three minute sound loop was performed live by Bilwa for the entire 60 mins. 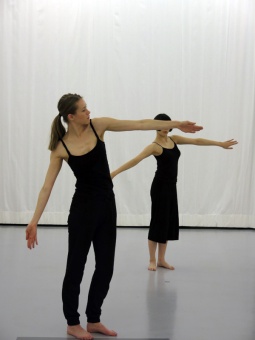 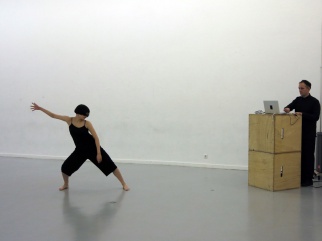 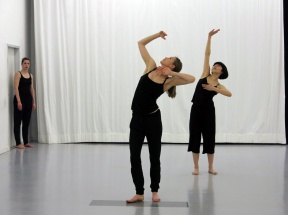 photos and video by Jasmin Schaitl

duo-through piano is a score for one dancer and one musician; using a piano (prepared as a string instrument, with four metal wires strung horizontally above the piano’s sound board), two fishing reels and lines, six metal chopsticks, and one violin bow. The fishing lines run from the reels, through the horizontal wires, to the dancer’s hands. Each movement made by the dancer makes a click from the reel, a rubbing drone from the wire, and; through vibration, produces a tone from the string connected below. These sounds are manipulated by the musician, standing at the piano, using the sustain pedal, preparations of metal chopsticks inside the piano, and bowing of the horizontal wires. The duo remains focused on the score, while, making compositional, aesthetic, and practical decisions.

In this score Elisabeth explores movement inspired by sound (texture and timing), as well as the visual element of the strings as lines in space. Her movement research revolves around the sensations of sound, rhythm, dynamics in contemporary music, the presence of the other performer, and how these translate in the body in improvised performance. Her performative presence is informed by the idea of unpredictability and surprise in different states of listening.

Bilwa’s position fluctuates between assessment – response and impulse – assessment. Using a limited palette, he will produce and alter sounds and give and receive sonic and visual impulses. The sound quality is atonal, with silence, drones, and incidental clicks and rattles; while the movement ranges from stillness to fluidity.

There is no hierarchy between the two elements.

Collective 三 (3) is the multi-disciplinary trio of William “Bilwa” Costa, Jasmin Schaitl, and Akemi Nagao, They have worked together, in different combinations, since February 2013.

As a trio, they began research in March 2014 at Tanzfabrik, Berlin and debuted their first piece, movement-sound-action at EchoBücher.

In October 2014, while in residency at workspacebrussels/KAAI Theater Living, they developed a new piece III (1). In March 2015, they premiered III (1) as part of the Performatik Festival, at KAAI Theater, Brussels.

In addition to their performance collaboration, the trio has co-led interdisciplinary workshops. 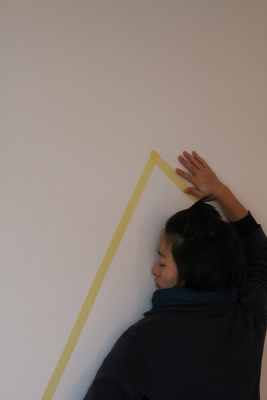 2. An improvisation structure for an ensemble of 12 dancers, 3 visual artists, and 1 sound artist.
v.
1. To cultivate material from physical, sonic, and conceptual spaces within a space.